skip to main | skip to sidebar

5. The Altar of St Gregory

The Pope gets back onto the Sedia, and it moves off again into the main part of the basilica. The Palatine Guard take a deep breath and carry on with their lugubrious Godfather music. The procession goes up the main nave and then turns left into the near aisle of the great south transept (what would be north in most churches). Here is the Capella Clementina, dedicated to St Gregory the Great (who is buried in the altar there). It had been Pope Clement VIII who decorated this chapel for the Holy Year of 1700, and hence the name. Pope Gregory, a man of outstanding erudition, was the man who saved Rome from the Lombards and who dispatched St Augustine to England to do some converting of the Saxons.
Again the Pope gets down and kneels to pray, though he isn't allowed long at all, and moves to the throne which has been set up. Here, he receives the obeisance of the cardinals, the archbishops and bishops, abbots, and the penitentiaries of St Peter's Basilica. The Cardinals, as you can see, ascend the throne with the trains of their cappae magnae spread out behind them. These trains had been nine feet long until Pope Pius XII, in the early 1950s, had them cut in half. I think Pope John lengthened them again. I suppose they are only worn at Gricigliano these days. Having kissed the Pope's hand (they used to kiss all sorts of other parts of him), their train is gathered up by Mgr Dante or his assistant and neatly hung over the Cardinal's arm.
The obeisances received, the Pope blesses all the prelates with the words Sit nomen Domini benedictum. That concludes this part of the ceremony.
Posted by Pastor in Monte at 02:15 20 comments:

The chapel of the Blessed Sacrament is located half way up the nave of St Peter's, on the right. It is a particularly splendid chapel where, I am told, until the reign of Pope John Paul II, the Blessed Sacrament was only reserved during a Papal Mass for the purpose of the Pope visiting it before celebration. In the Extraordinary Form, a bishop visiting a Church always goes first to visit the Blessed Sacrament, almost before he does anything else. Now, I am pleased to write, the Lord stays there all the time, often exposed, and it may be visited only by those intending to pray. You'll see Pope John blessing to right and left as he goes in, and the bystanders kneeling to receive the blessing. This blessing-while-processing is another episcopal custom that has, by and large, been dropped in this country, though I remember Cardinal Hume doing it. It is still a part of the rite of the consecration of a bishop that, once the mitre is on, he does a sort of a lap of honour of the cathedral, blessing as he goes.
Anyway, the Holy Father has got off the sedia and walks into the chapel to kneel in front of the Blessed Sacrament—Peter before Christ, which is why, no doubt, the Sistine Choir massacre Perosi's setting of Tu es Petrus: thou art Peter, and on this rock I will build my church.
You will see just how huge the manta is when Mgr Dante, the papal master of ceremonies, drapes it over the faldstool at which the pope kneels. The Holy Father is not allowed long to pray; before long Mgr Dante is tugging at the manta —come on, come on; that's enough praying!.
Though of course there may be another explanation. The Sistine Choir have, let us say, a unique sound. They get the notes right, more or less, but the singers (who often moonlight as chorus in the Rome opera) are chosen not for their melodious voices, but for their sheer prodigious lungpower. Not so much bel canto as can belto. Things have not changed; indeed, I think the Sistine Shriekers have, if anything, got worse. I remember watching the plumbing-in of Pope Benedict and seeing the Sistine Shriekers shrieking from the atrium of St Peter's basilica. They were singing the Sanctus, and were looking every which way, but not at the conductor, who was ineffectually whirling his arms round and round, the only musical direction being, seemingly 'louder! louder! louder!' Curiously, they are rather proud of what they are pleased to call their style; Mgr Domenico Bartolucci, who was conducting at this coronation and extraordinarily was still in office until disgracefully sacked in 1997 (disgracefully, I mean, by the manner in which it was done; it would be hard to fault it as a musical decision), well, old Bartolucci would vigorously defend the mode of singing, each singer making what he will of the music without regard to the overall sound, saying that this was the tradition in the choir. Well, it's time it wasn't, is all I can say.
Bartolucci's predecessor was Lorenzo Perosi, who wrote this setting of Tu es Petrus. He held the job from 1898 (when there was still at least one castrato in the choir) until his death in 1956. This means that for a hundred years, the Sistine was in the 'care' of only two men. In the early 1920s Perosi briefly went nuts—one manifestation of this was held to be the fact that he kept trying to become a Protestant. Bartolucci didn't have much time for Perosi, actually, saying that it was he who was responsible for the decline in Church music.
At 1.54 for a few seconds, Cardinal Yoda from Star Wars you can see.
Posted by Pastor in Monte at 02:50 10 comments:

Pope John now gets back onto the sedia and is carried into St Peter's. The band of the Noble Guard blow the dust off their car horns and ponderously parp out Silveri's Marcia Nobile from the window overlooking the nave over the main entrance. During the period of non expedit, from the Risorgimento until the Lateran Treaty, at least one Pope was crowned at this window rather than on the balcony outside its opposite across the Sala della Benedizione which lies over the porch.
The Holy Father heads about half way up the nave, and then turns right into the chapel of the Blessed Sacrament. You can see the little tonsures on the heads of the assisting clerics at about 4.32: these mini-tonsures have now entirely vanished.
Posted by Pastor in Monte at 04:34 4 comments:

2. Obeisance of the Canons


The Pope now arrives in the atrium of St Peter's, and the sedia is carefully set down. Mgr Dante struggles to find and release the Holy Father's feet from the yards of precious cloth, and, wobbling a little, the Pope moves to the little throne that has been prepared. He sits down, and is joined by Cardinals Canali (left) and Ottaviani (right).
The canons of St Peter's now come and do homage. Technically it is they, not the Pope, who are in charge of things in St Peter's; traditionally they even presented the Pope with a little purse of money as a stipend after each celebration 'for a Mass well sung'. Therefore they are the first to welcome him to the basilica. Most of the canons are priests past their prime and in sort-of retirement which is why some of them are a little less athletic than others. Their job had always been to sing the Divine Office in St Peter's each day, for which they were granted a substantial apartment, their living, and some pocket money. The office ceased to be sung in its entirety in about 1948, but the canons are still there, never having been fired.

Posted by Pastor in Monte at 04:51 No comments:

1. The Descent of the Scala Regia 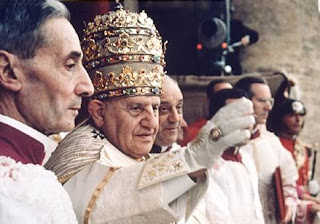 The coronation of Blessed Pope John XXIII took place fifty years ago today, on November 4th 1958, the feast of St Charles Borromeo. It seems a good opportunity to post, together with comments, in one place the videos which were placed on on You Tube about 18 months ago. These had originally appeared on my main blog, Valle Adurni, but various vicissitudes had led to their removal. Today seems a good day to put them back again, though this time I am starting a new blog to do it, which seems more sensible, since I'm sure nobody wants to wade through pages of my nonsense to find this more interesting stuff.
These videos were painstakingly gathered from a VHS video obtained by a friend from some obscure Italian noble who had advertised them. Clearly they are a recording of the RAI (Italian television network) production and so, in the standard of that day, the production is not terribly good.
Before anyone asks me—and plenty have—I'm afraid I am not prepared to go into production and post copies of this all over the world. It is mostly a question of time: though I have rendered the Video onto two DVDs, I can only copy one at a time, and I am far too busy to be able to sit over this. I am likewise not prepared to let my own copy out of my hands! My original copy of the video was lent to somebody. Not returned. Three video copies of that, likewise. And this YouTube version is made from my last remaining video, a truncated copy of my copy of my friend's copy of the Italian nob's copy of the Rai original. Which accounts for the fact that the quality is even less good than it might have been.

That all being said, what remains is an extraordinary treasure. This ceremony has now been entirely abandoned, and who knows if it will ever be revived. If there is to be a revival, it is highly unlikely that it will take place in the renaissance splendour shown on that day in 1958. Although Bd Pope John's successor, Paul VI, was crowned, this took place in a changed way which shows that from the word go, there was a lot of liturgical tinkering to be expected in that pontificate. Bd John's coronation, then, was the last to take place in its unchanged form—the commentator at one point observes that the rite was essentially unchanged for a millennium.
Posted by Pastor in Monte at 22:42 1 comment:

READ ME OR RUE IT!

Do remember that this is in blog format, which means that the first post is in last place. If you want to watch from the beginning, you will need to scroll down to the last post and work upwards.